We replicate them below and hope to add to this series shortly. Thank you to all the officials at the Games who contributed to the factoids. If you would like to tell us a factoid, please email hello@englandathletics.org 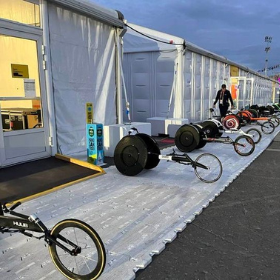 Whilst we thought the 7am start for the marathon was early enough, the officials had to be there hours before. The council removed a large number of “sleeping policemen”, laid timing strips across the road to record intermediate times and covered tramway tracks that went across the course. While the officials were walking down to Smithfield at 4.30am to prepare, the Chinatown clubs were just closing but the food outlets were really busy. 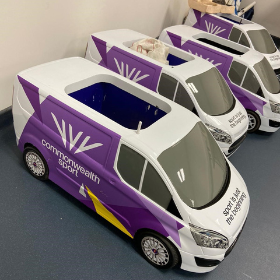 Ever wondered about the cool remote controlled cars returning throwing implements? Well they were developed by Bob Hammond, one of our own field officials. The first prototype was used at the 2013 Anniversary Games and then the following year a new shape and design was used in Glasgow for the 2014 Commonwealth Games. The vehicles mean that the infield is less cluttered for TV, it’s safer for the officials, and it stops the step count of our officials going too high! 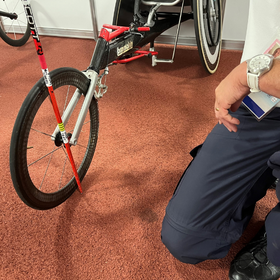 While seated throwing frames are measured and checked in the Technical Room and are brought out to the field of play just before the appropriate event (seated shot, discus, javelin or club), racing wheelchairs are checked in the call room as the athletes need them to go from there onto the track. Front and rear wheel sizes must be a maximum diameter of 50cm and 70cm respectively. An extendable marked up ski pole does the job very quickly! 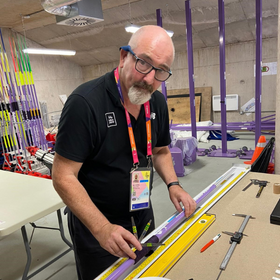 Did you know that at a top level event, 18 measurements are made for different parts of a javelin? Every measurement has to be recorded. If the javelin passes, it is put in the competition for any athlete to use (including pools or finals the owner is not competing in). The current record for measuring and recording all 18 points is held by John Askew and Tom Finch and stands at 90 seconds. 2022 Commonwealth Games Equipment Officer Steve Marshall (pictured) is hoping to beat that this week! 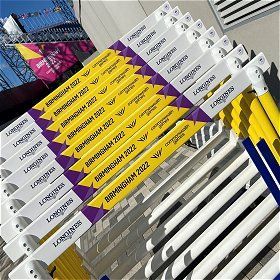 Do you know how many hurdles can go out onto the track at once? Each hurdles event (100m, 110m and 400m) requires the athlete to go over 10 hurdles. So that means you can have up to 80 hurdles out at once! At the World Championships held in London in 2017, 40 of the 140 hurdles provided finished broken. This breakage rate varies a little depending on whether the hurdles are wood or plastic but is generally around the 30% mark. 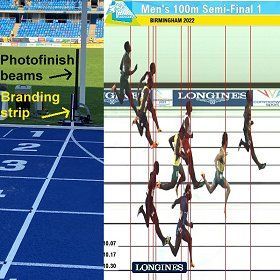 You’re probably aware that Photofinish can be used to determine the official place and time for each athlete – and not just when it is a close finish. But have you noticed that the Photofinish images here at the Games also have the Commonwealth Sport logo and the  sponsor logo in the background? This is not a banner at the finish line in the real world but due to a flashing strip positioned on the finish line. The logos flash in short bars and this appears as part of the image captured by the Photofinish camera! 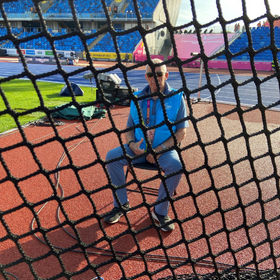 Have you cheered on your favourite athletes at a major athletics event? In the stadium, it can be impossible to hear officiating colleagues just metres away. So how do they communicate? They use non-verbal cues such as a subtle thumbs up or down, crossed arms (validity), horizontal arm (sector), a palm show of a red or white card, etc. Officials have to gather information from different areas: if an athlete needs to pass an attempt or if an official needs to remove the EDM spike from the ground once a distance has been recorded (usually a right arm sideways lift). See if you can spot the cues when you’re watching! 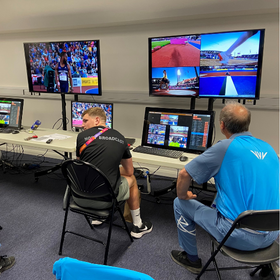 From behind the screen

At a major event, some technical officials are allocated to be Video Judges. They review red flags, track umpire reports (sent via radio), potential fails or infringements that may have been missed at the event site or review a trial if the event referee asks. The Video Judges will report any incidents to the Video Referee who will confirm whether there has or has not been a fail / infringement and inform the appropriate Referee on the field of play via radio.

Find details of all upcoming Officials’ courses for qualifications and development opportunities.