Although runners may have been able to train relatively unhindered during the Covid-19 pandemic lockdown restrictions, field-eventers in particular have been severely impacted. Our regular Coaching webinars have highlighted some of the ways in which athletes and coaches have been able to adapt to the changing environment.

In one of these recent webinars, Mark Bradford, Regional Coach Lead for Throws in the South West, provided guidance for adapting training exercises for javelin throwers. He recommended a holistic viewpoint, encompassing the psychological aspects of performance especially around the importance of self-belief.

Although recent government updates and England Athletics guidelines (click here to view) are starting to offer a step towards a return to some sort of normality, some athletes are still having to make the best use of a home environment. Not all facilities will open straight away and not all athletes and coaches will feel confident training in a restricted group environment.

Without access to large open spaces, javelin throwers are clearly having to make great sacrifices now, but Mark believes the impact can be minimised using some ingenuity – and even a pair of rolled-up socks! “Javelin balls” are the next best alternative when it comes to event specific training, although he admits they are in no way a substitute for a javelin.

Asked about javelin balls during the question-and-answer section, he responded: “Given the situation we’re in that’s probably all that most people are going to be able to throw. They are not a perfect substitute because of the difference in the way force is applied and the resultant velocity. A ball, with a small surface area, can be released much faster than say a 2m long javelin that has a greater surface area.

“Not to say that’s it’s going to give you a false representation in terms of the biomechanics. Ball throws are of great benefit, placing less stress on joints and muscles, so if that’s what you’ve got at your disposal I would, for your explosive release work, use a ball which you can put in a greater volume of throws with.

“Do it with a rolled up pair of socks as well if throwing a ball against the wall is going to cause a problem with the neighbours.”

Not everyone has access to home gym equipment, but there are ways around that. For example, Mark suggests that tyre inner tubes could be a substitute for resistance bands. “Car inner tubes for more strength based work, bike inner tubes more for isometric holding positions,” he said.

One of his athletes had improvised by using a heavy log on a beach to adapt his explosive strength work, another did resisted hill runs using a homemade harness made of rope, attached to a wad of lead. One devised a hurdles system out of garden canes for his plyometric speed strength work. Mark highlighted some of the principles for adapting javelin training sessions (see pic). 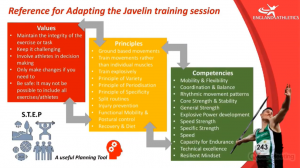 Aside from the practical implications of lockdown, the mental aspect is worth considering by coaches too. Keeping athletes motivated is a particular challenge, Mark noted. Suggesting how to address that, he said: “Make sure there are open channels of communication with the coach and training group… It’s vital to have that continuing engagement or you can feel completely isolated. Also, this is a really good time for coaches and parents to sit down with athletes to evaluate and readjust goals if required.”

Mark’s webinar also focused on some of the wider considerations for coaches. For example, he stressed the importance of mental wellbeing, the psychological aspect of training that can impact upon performance, in particular self-belief.

“I think self-belief is the bedrock really of being a competent athlete,” he said. “If you believe in your own ability – equal to the task or skill, you are more likely to attain your goals. When an athlete has doubts in their own ability it can prove hugely disruptive to their lives and have a detrimental effect on their performance and even those people around them.”

Six segments of self belief

Mark listed six factors that can influence self-belief which coaches need to be aware of and know how to respond correctly to:

These are clearly challenging times for throwers but, with a wise and holistic approach, coaches and athletes can ensure it’s time well utilised, Mark believes.

“You can actually develop in this period, rather than just maintain, by focusing on limiting factors and the skill learning required to address them and turn them into strengths. Any development also may have a distinct effect on an athlete’s motivation levels, knowing that they are refining and acquiring skills that are aligned to achieving their performance and even outcome goals.

Click here to view our full schedule of Coaching webinars – suitable for leaders, coaches and athletes.