Turning individual discipline form into multi-event success requires skill, dedication and plenty of patience in training – traits all on display at the Age Groups Combined Events Championships in Sheffield.

This event traditionally marks the end of the indoor season so it’s no surprise each and every athlete competing was at the top of their game with PBs and impressive performances order of the day.

And this was very much the case in the U17 women’s competition in which the lead changed hands three times going into the final event, the 800 metres where just seven points separated gold from silver. At that point, with four burning laps to run it’s a case of throw the form book away and let’s see who wants the gold the most – a question Jessica Duncton (Cheltenham and County, Mark Wanklyn) answered in some style as she took the title with 3367. But perhaps Millie Hardy (Hallamshire Harriers, Martin Bishell) best summed up what this event is all about as she wasn’t even in the top three with one event to run, appearing from far back in the field to take the silver medal thanks in part to her superb 800m, not to mention an impressive long jump. As any athlete will tell you, it’s never over till it’s over!

“I was very, very tired and I was struggling a bit with my legs but I pushed it because I wanted to win,” said Jessica, overjoyed to have won the gold medal.

Here’s how it all unfolded…

Personal bests are always useful tools in the combined events, so it was encouraging to see so many in the 60 hurdles. The early leader would be Jessica Duncton who set the mark for everyone to follow with a lifetime best of 8.62, good for 991 points. It also set the scene for an action-packed day as it was 0.06sec faster than her bronze medal winning run at the National Champs last month. In the high jump, two failures at 1.50m did make the spectators (and probably Jessica) slightly nervous but she comfortably sailed over that height, just 4cm below her lifetime best, at the third time of asking. She then improved to 1.53, a clearance that turned out to be key as it kept Jessica in the lead heading into the shot where she was just 1cm shy of her best with 10.30.

But in this ever-changing competition, it was Hayley Dimond (Marshall Milton Keynes, Claire Dimond) who moved into the gold medal slot at this stage thanks to her final round 12.70m. Hayley a top performer nationally in the shot – bronze in the national champs last month – is also a solid long jumper as her 5.08m in the opening round perfectly illustrates. However, Jessica, the early leader wasn’t about to let the title slip away without a fight and she opened her account with 5.18m, a 24cm PB and a jump which re-established her as the athlete to watch and gave her that slender seven-point advantage. Waiting in the wings, but still out of the medals was Millie Hardy after a superb 5.36m jump.

So, it was all to play for going into the 800m where that fighting spirit was superbly demonstrated. Jessica moved into second after the first lap with Hayley back in fifth; both athletes working hard. The form book said that would be the final result, but Hayley closed slightly with 300m to run. It would go all the way to the final lap where Jessica showed she had something in the tank and surged away from her long-time rival to secure the gold medal with 2:40.86. Up front, almost unnoticed Millie won the heat by close to four seconds and clocked 2:32.43 to haul herself into the silver medal position just 15 points shy of the gold with 3352. 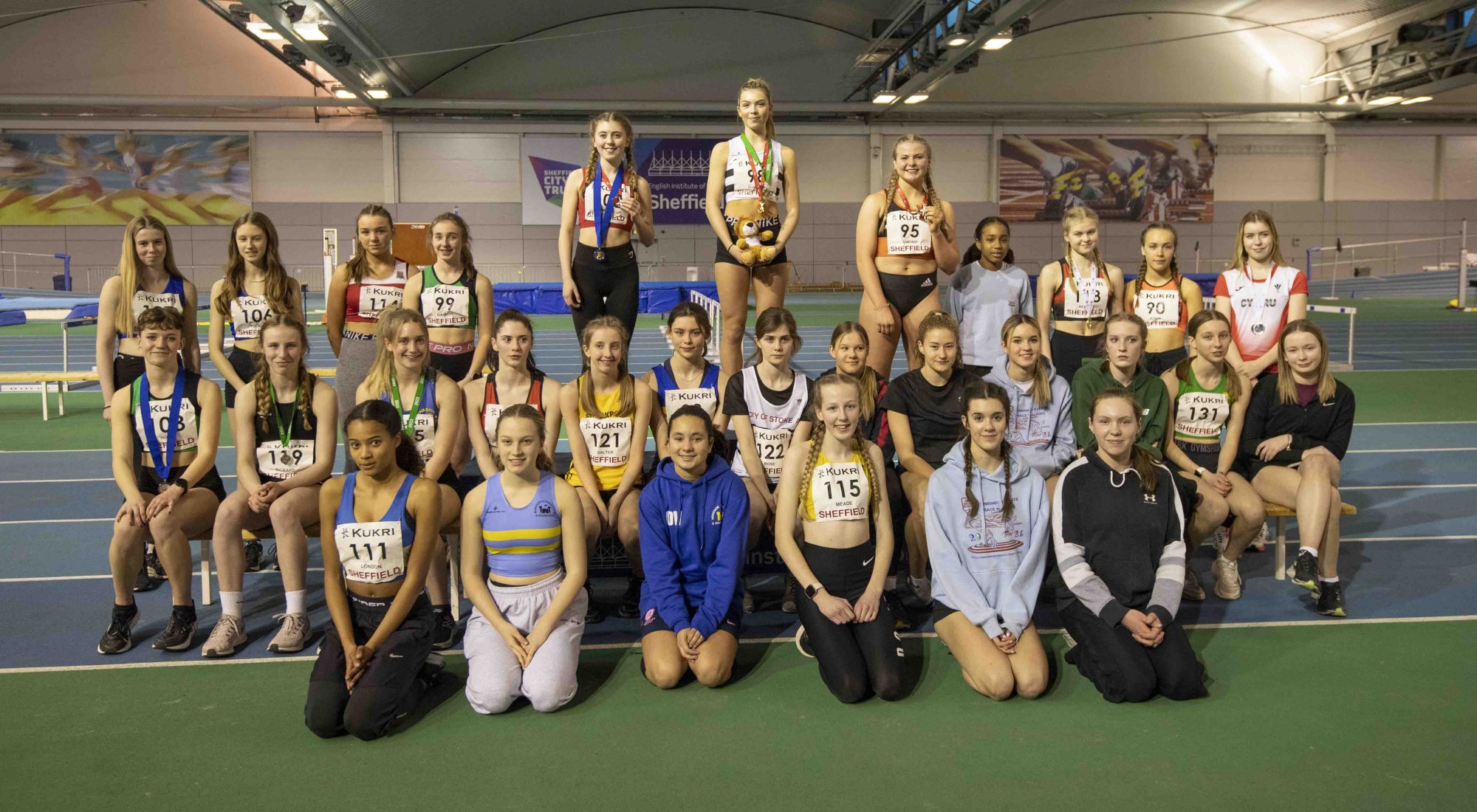 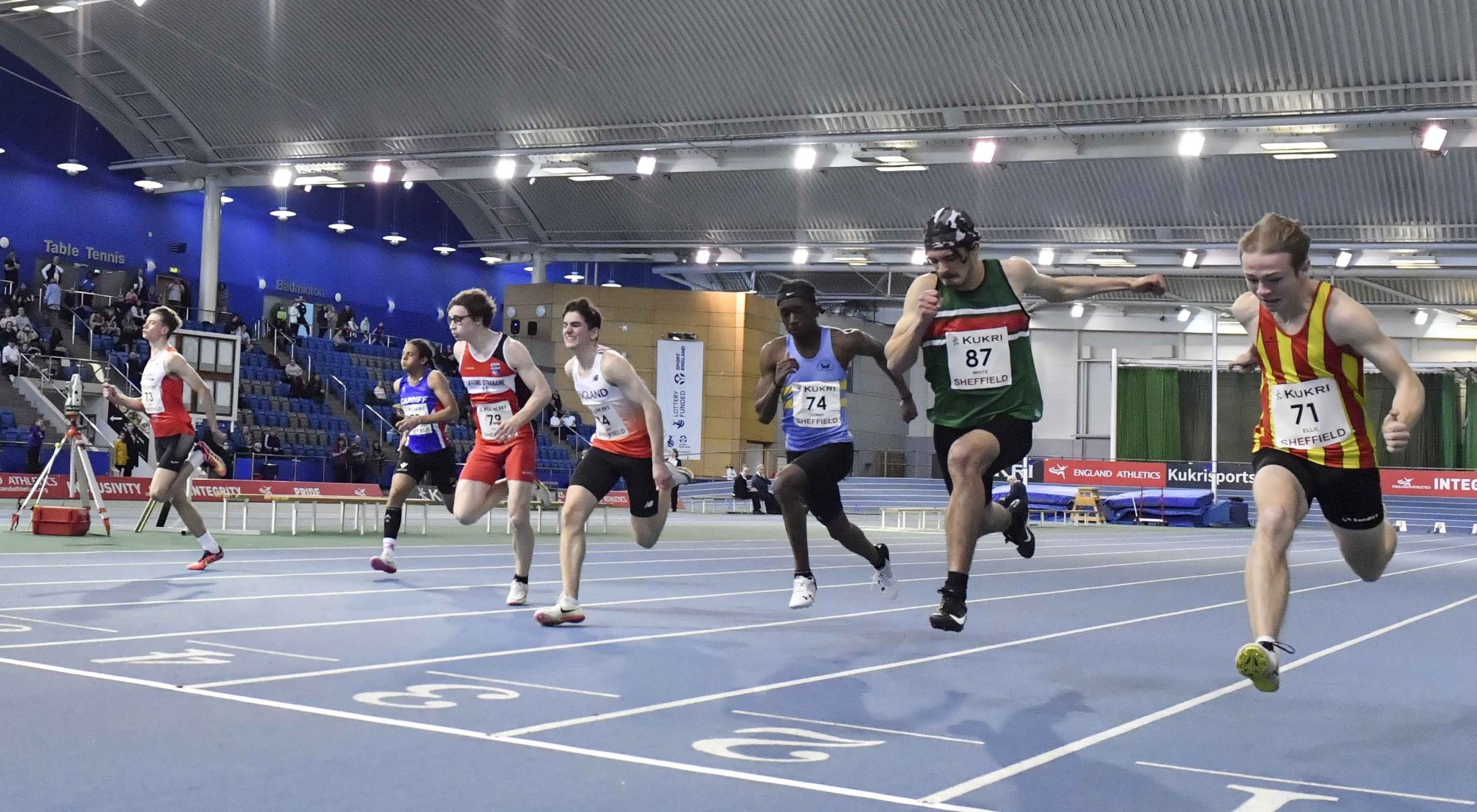 It was all about power in the 60m as Ethan Ellis (City of Norwich) flew to 813 points and a personal best of 7.17 for an early, but close lead from Morgan White (Sale Harriers Manchester) who ran 7.22, also a personal best. 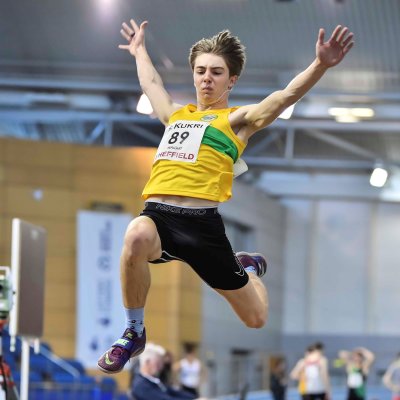 In a long jump competition that saw seven six-metre plus jumps, it was Ethan who really stood out as he followed his win in the 60 metres with a massive personal best of 6.58, good for number 2 on the UK rankings for 2022 and more importantly in this instance, 716 points. Ethan’s second round throw of 10.06m in the shot placed him seventh in that discipline but far behind Northern Ireland’s Finn O’Neil (Lifford Strabane, Wendy Philips) who threw a massive 13.34m to take a marginal lead into the fourth discipline, the high jump.

But that is a key event for Sam Wright (Chelmsford, Simon Hemmings) who was third at the start of it thanks to a solid 7.40 in the 60m, a massive 28cm PB in the long jump of 6.33m, and 11.08m in the shot. He has closed that gap to just nine points thanks to a superb 1.89m clearance, a PB indoors and sixth on this year’s rankings.

“I just wanted to get a PB in the high jump and now I just want to keep on rolling for tomorrow,” Sam said. “I have momentum on my side so hopefully I can keep going,” he added.

Of course, it’s all to play for on Sunday as it always is with the pole vault still to come (as well as the 60 hurdles and 1000m), but one thing is for sure – it’ll be an intense competition where fine margins will be very much order of the day.