England will have three athletes in contention for medals in the long jump on Sunday after they excelled on the runway on this fourth day of track and field action at the Commonwealth Games.

Sawyers showed great composure after a foul in the first round, ultimately finishing fourth best overall with an automatic qualifier.

She made sure of registering a jump in the second with a 6.53m and then went out to 6.81m in the third. Although the wind was marginally over the limit for record purposes at 2.1m/sec, the Glasgow 2014 silver medallist has only twice jumped further legally in her career and looks in good form as she prepares for her third Commonwealth final.

She said she thought the second jump would have been safe but added:

“I wanted to jump again. I wanted to really put on a performance for the amazing crowd… So in the third round, I just let loose. I really went for it. And I was rewarded with a big ‘Q’, auto qualifying for the final. I’m delighted.”

In the same pool, Abigail Irozuru (Aston Moore, Sale Harriers) bounced back well from fouls in both of the opening two rounds to post a 6.59m (+1.3), which was good enough to make her seventh best to make the final.

Meanwhile, in the other pit, world indoor bronze medallist Lorraine Ugen (Dwight Phillips, Thames Valley Harriers) leapt 6.79m (-0.2), which was four centimetres over the automatic qualifying distance, in the second round. She will also be in her third final after a fifth and fourth respectively in the last two Commonwealths. 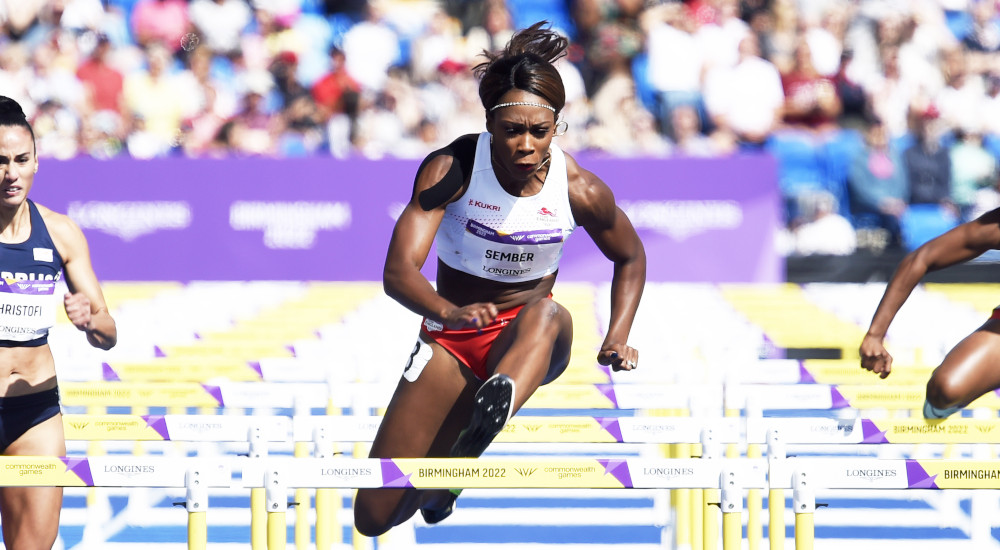 Sember celebrated her 28th birthday in style with a comfortable qualification in the 100m hurdles heats.

The athlete who was fifth in the World Championships won her heat with 12.67 and, despite the wind being slightly over the legal limit at 2.5m/sec, looks still on the sort of form that brought her a British record 12.50 in Eugene. World champion and world record-holder Tobi Amusan of Nigeria and Michelle Jenneke of Australia were the only athletes to run quicker on their routes to the final.

After hearing a rendition of Happy Birthday from the packed crowd, Sember said: “The celebrations probably need to stay on hold for the most part. I can eat a bit of something I enjoy but I’m definitely going to have to wait until after the next race [the final on Sunday], when I medal hopefully… I’ll get some rest tonight, sleep and stay hydrated and I think there’s more in store.”

Katie Snowden (Herne Hill Harriers) kept herself out of trouble by leading on the last lap of her 1500m heat and finished strongly to make sure she was one of the five automatic qualifiers.

Snowden, who was 11th in the last Commonwealth Games, clocked 4:16.09 as she came home second, just behind Winnie Nanyondo of Uganda.

She said afterwards: “I’m happy with it. I haven’t raced that much this season because I’ve had a couple of interruptions, so I was actually pleased they had the heats today because I know there was talk of it being a straight final. Another good run in my legs will put me in a good place for Sunday. It’s pretty open.”

Harry Kendall (David Hull, Tonbridge) is up to sixth after eight events in the decathlon.

The England champion, who dislocated his ankle six weeks ago, began the day in the 110m hurdles with 15.72, which was more than half a second down on what he is capable of.

However, his performance in the next two events, belied any injury niggles. He threw the discus 42.09m, which is just 68cm below his PB. Then, he made the most of the support from the many thousands who stayed around well into the afternoon to watch just the decathlon pole vault, succeeding with third attempts at 4.30m and 4.40m. The latter was an outdoor PB and just 5cm below his best ever. Just the javelin and the 1500m remain this evening.