We always love to hear stories from our athletics family, to shout about and share your successes and triumphs, and to inspire others to get into and enjoy our sport. Here Kim shares her story of how she got back into running in later life and joined a local running club to help improve her mental health and wellbeing. She fell in love with running which lead to her taking our LiRF qualification and becoming a run leader… and she hasn’t looked back since! Read on to find out more about her story, and how you can get into run leading too…

Kim’s first experience of running was in school, she got into cross country at the age of 10 and, during senior school, competed in the National Schools Cross Country for Gloucestershire. She ran occasionally throughout her adult years and took part in the Great North Run a few times whilst living in Newcastle but, by her own admission, it was nothing too serious. 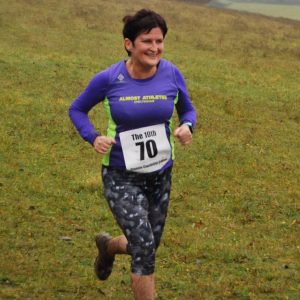 ‘When my partner was ill and having treatment a few years ago, I got quite depressed and my own mental health and wellbeing began to suffer. I joined Almost Athletes running club as something to do as a distraction and to lift my spirits. This got me running regularly again and I loved the social side of the club too. Almost Athletes is a fantastic and highly supportive club that caters for all adult age groups and abilities, with such enthusiastic committee members and volunteers [and also has Mental Health Champions through England Athletics’ #RunAndTalk programme]. Such a social and supportive setting it is, that I wanted to do more to help out however I could. I was told about the Leadership in Running Fitness (LiRF) qualification and given the opportunity to go on the course.

‘I gained my LIRF qualification a few years ago now and, thinking back to the course, admittedly I approached it with a little trepidation, but any nerves I had were soon put at ease. It was a thoroughly enjoyable and engaging day with plenty of practical help alongside the running theory. The tutor was experienced, knowledgeable and very enthusiastic, and it was great to meet other people on the course too.

‘After completing the course, I regularly led groups at our weekly club runs, with the help and support of other qualified Run Leaders. My then partner, now husband, also got involved when he completed his treatment – Almost Athletes gave us a fantastic new social life as well as getting us both back into fitness. 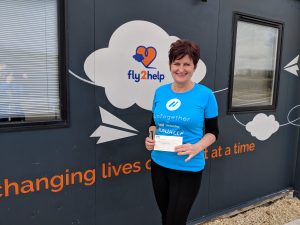 ‘After a couple of years of group and run leading, I decided to set up my own group, Run2Help, through the England Athletics RunTogether programme. Initially I thought it might just be a one-off Couch to 5k, but it has grown far beyond anything I could’ve imagined and will be three years old in March. Attendees make a suggested £2 donation per run to the small aviation charity, fly2help where I work, which is how I came up with the name, ‘Run2Help’.

‘The group has had a total of 134 runners registered to date and now meets twice a week, with a regular attendance of around 10-15 runners. Ages range from 18 to 68, with three generations coming along from one family. Other runners have brought friends and family along to join too. We have group t-shirts and have produced hoodies, and most definitely look and feel the part. Amongst the group, many are regular parkrun participants and volunteers, and have also volunteered and raised sponsorship for fly2help. We’re on target to have raised £5000 for the charity by our March anniversary, which we will be celebrating with 5k and 10k runs on Sunday 15th March – followed by all-important celebratory cakes and coffees!

‘I have so many success stories from the group, such as our oldest member, who was initially unable to complete a minute and a half on the Couch to 5K programme but went to successfully completing a half marathon! We have also had a group trip to Run Disney in Paris, where members competed in 5k, 10k and Half Marathon distances. There’s a real sense of belonging and I have made some amazing friends. I had breast cancer last year and was overwhelmed by the support I had from them, it’s a family and community that truly support one another. I also set up a Couch to 5K programme for local cancer charity, Maggie’s, who supported me immensely through my treatment. Something I am planning to do again later in the year, enabling other cancer patients and survivors to regain their fitness after treatment.

‘I honestly believe that the last three years have been my best running years! I’m planning to get back into running for myself; my PB’s are a few years old now and I’ve signed up for several races in the coming months in the hope of changing that. Some of my Run2Help members will be joining me on these too.

‘My advice to anyone thinking about doing the Leadership in Running Fitness qualification would be to go for it! Get your qualification, set up a group and go for it – there’s so much support and enthusiasm out there and you can really make a difference.’

‘The RunTogether website and toolkit made it exceptionally easy to set up the group and all the members find the app very easy to use – we’ve just published our second newsletter on the website, have a read here and anyone that’s local please do join us on a run soon. You can search for and see all our upcoming runs here: runtogether.co.uk/Run2Help .’

Kim is a true inspiration and shows that everyone can get into running and run leading at any age. What starts out as a recreational weekly social can lead into creating a community, supporting others on their running journey and taking your own to new heights.

If Kim’s story has sparked your interest in taking up running and getting into run leading, follow the links below for more information.

Click this link to find clubs and RunTogether groups near you