England Athletics fielded one of its largest teams in history as approximately 170 selected athletes pulled on the white and red rosed vests on 3 July to represent England Athletics Masters in a series of three races, over 5k, 10k and the half marathon at the Long Course Weekend over in the Welsh resort of Tenby.

Having been invited over to the West side of the Carmarthen Bay through the foresight of Alex Donald and Bernie Jones of Welsh Athletics, the weekend’s festivities were the culmination of months of hard work and the vision of Tom Craggs as England Athletics Road Running Manager.

Aside from the interruption of a global pandemic, many endurance based athletes over the age of 35 have long targeted Representative Matches through a rolling series of Qualification Races. On this occasion however, athletes were expected to submit a request for consideration before the selection panel met to pick the squad in early June. The opportunity to go head to head against another home nation in a full international proved a mouth-watering prospect for the athletes who applied.

There were a total of 23 English teams who were each captained on the day in ten-year age categories from 35-plus all the way through to 65-plus, with the squad seeing a healthy mixture of seasoned international athletes who acted as mentors to debutants.

The half marathon was particularly challenging in terms of the severity of the climbs, with Welsh Team Manager Bernie Jones feeling that his team may benefit due to the home advantage gained through local knowledge and residency in the valleys. Once again however, England Athletics Masters held their own thanks to the leadership qualities of skippers Jonathon Harding (South Leeds Lakers Running Club), Joseph Gonzalez-Armas (Kevin Quinn, 26.2 RRC), Steve Sincock (Matthew Long, South West Road Runners) and Brian Rogers (Ipswich Jaffa). The women more than matched their commitment to the cause courtesy of Hannah Roberts (Dartford Harriers AC), Nicola Steel (Wakefield Harriers), Claire Ward (Lonely Goat RC) and Janice Moorekite (Larkfield AC).

By mid afternoon as thousands flocked to the centrality of Tudor Square in Tenby, it was clear that England Athletics Masters had their noses in front. It was evident that if the 10k squad could hold their collective nerve that the inaugural International Masters Road Running trophy would be theirs for the taking. James Denne (Matthew Long, Gloucester Athletic Club), Dan Robinson (Bournville Harriers), Gary Tait (Sytal) and Desmond Michael (Barnet and District AC) roused team spirits, whilst the work of Emma Taylor (Kevin Hendricken, City of Stoke on Trent), Samantha Bilbie (Springfield Striders), Sharon Daw (East Cornwall) and Elaine Statham (Congleton Harriers) sealed the proverbial deal as the trophy was paraded around the cobbled streets and archways around the Imperial Hotel. 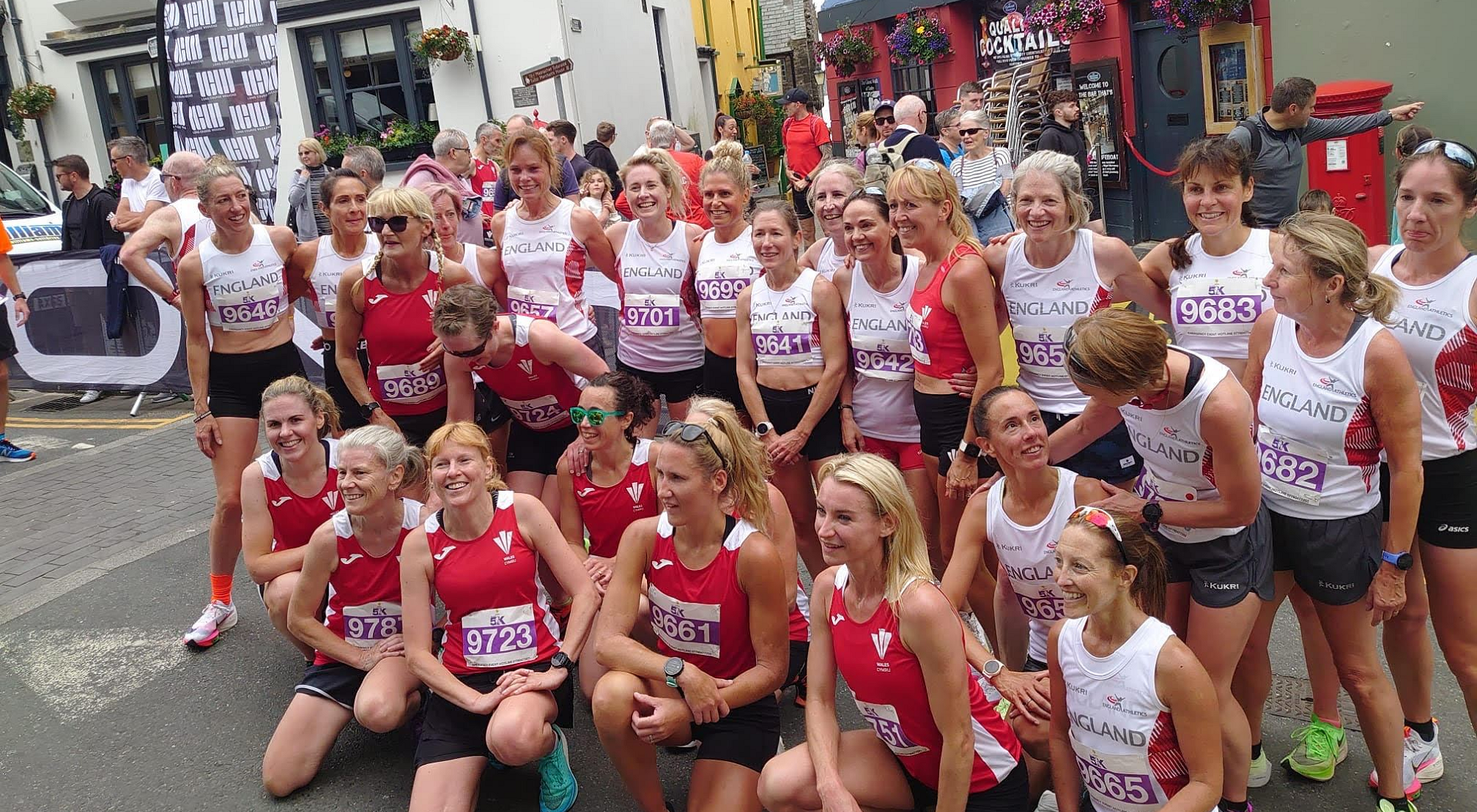 With COVID still alive and kicking, several in the wider England Athletics Masters squad had to withdraw through illness whilst others had sustained injury. This being said, those selected in the squad were made to feel part of the wider experience as they were rewarded with a range of educational opportunities on their journey to Wales. Online webinars and drop-in clinics where both personal coaches and athletes could discuss their training with team coaches were facilitated and became an inherent part and parcel of the package. Educational themes included a diversity of topics such as periodisation of training, running to kinaesthetic feel and competition day psychology.

“Regardless of whoever won a trophy, the real winner this weekend was Home Nation International Athletics for Masters. Thanks to the vision of Tom Craggs and the likes of Charlotte Fisher who preceded him, England Road Running is playing a pivotal role in developing both participation and performance pathways for endurance based masters athletes. It’s evident that England Athletics recognises, values and responds accordingly to the diversity which our masters athletes bring to our sport and long may it continue. It’s a truly exciting time to be a masters road runner if opportunities are grasped”.

Masters athletes now cast their gaze ahead to the 10k Representative Match in Bristol on 25 September and the Marathon match in Chester on 2 October. Those looking further ahead can have their appetites whetted by three offerings back in Chester in 2023, with the 10k representative match being in March, the Half Marathon pencilled in for May and the Marathon for October.