Saturday night’s Commonwealth Games athletics programme was all about finals – seven of them with plenty of Team England interest to keep the crowd entertained.

Of course, with the men’s pole vault, the women’s 800m, and men’s 200m forming part of that list – all events that England had much fancied athletes in – there’s no surprise hopes were high that the home nation would bring home plenty of medals.

And that proved to be the case with three silvers and one bronze – a great return under the lights of the Alexander Stadium.

Speed versus endurance; but throw Kenya’s Mary Moraa into that mix – a 400m runner learning what the distance is all about – and you had the makings of a real classic. And it didn’t disappoint.

Moraa, who had actually closed faster than Hodgkinson in Eugene last month, flew through the first 200m in a tick over 26 seconds before easing back after that manic opening. In the next 200m she drifted from first to last, looking like her final was over while up front Hodgkinson ran what looked like a perfect race as she passed 400m in a just over 56.5.

She kicked hard with 200m left and appeared to have it all under control, Muir beaten for pace. But almost unnoticed Moraa moved through the gears and in the final 120m clawed back what appeared to be an impossible gap to ease past Hodgkinson for the gold in 1:57.07 whilst Muir took the bronze 1:57.87 with Alex Bell (Andrew Henderson, Pudsey and Bramley) sixth in 2:00.52.

“Frustrated,” said Hodgkinson looking for words to describe what she calls “yet another silver.”

“I was hoping that by moving ahead with 200m to go I’d beat her, because that’s how I beat her last time. I thought she’d slow down, but you can’t predict what people will do. It’s often a bit hit-and-miss: you think you’ve got it and then someone comes past you.

“I came here to win the gold, but this is an important medal to get in a world-class field. Overall though it was a decent day,” she said.

The men’s 200m was all about incredible times as England’s Zharnel Hughes (Glen Mills, Shaftesbury Barnet Harriers) ran what could be described as a perfect race yet he could only take the silver medal in an outstanding 20.12.

He did nothing wrong, and ran what experts described as an amazing turn, but he just couldn’t get in contention with Trinidad and Tobago’s Jareem Richards who ran a wonderful Games record of 19.80, fully 0.17sec faster than the previous mark.

“First and foremost thank you God for allowing me to showcase my times to the world,” said Hughes, overjoyed to have won a medal.

“You saw the celebration at the end of the race tonight, it was fantastic.  I’m doing the Euros next, so to come away from this with a medal is great. I really appreciate all the help I’ve had on the way.”

The start of the men’s pole vault was delayed because Australia’s Kurtis Marschall’s poles were lost on the way to the stadium, but once he was reunited with them, he quickly found his form. A third-round clearance at 5.50 set him on his way before he was the only man to clear 5.60 (and later, 5.70), a height which secured him the gold medal. 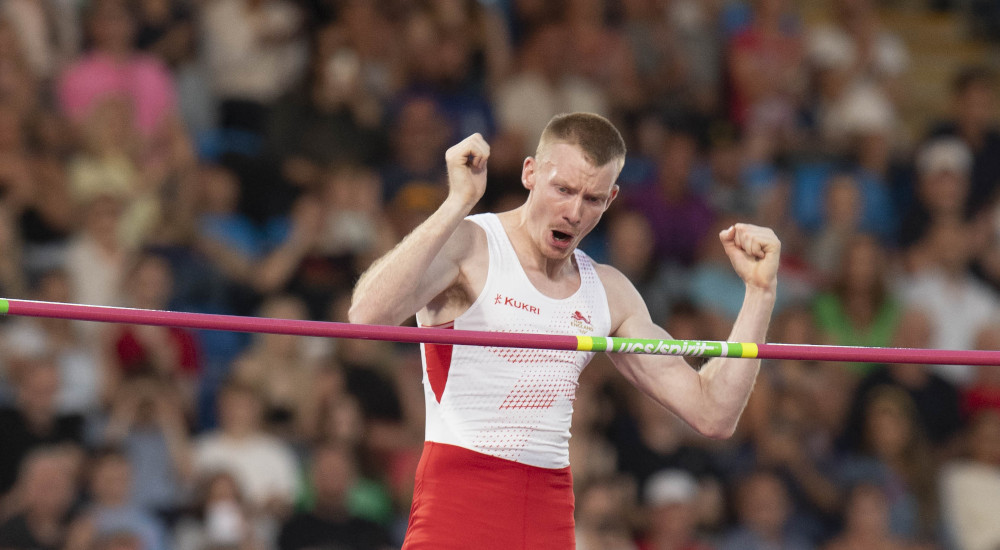 Behind him it was a battle between the English duo of Adam Hague (Trevor Fox, Sheffield and Dearne), the former European Junior champion, and British record holder Harry Coppell (Scott Simpson, Wigan and District).

The pair switched positions all competition long but thanks to a first-time clearance at 5.35 and 5.45 before a final jump at 5.55 after Coppell had cleared 5.50, it was Hague who took the silver. 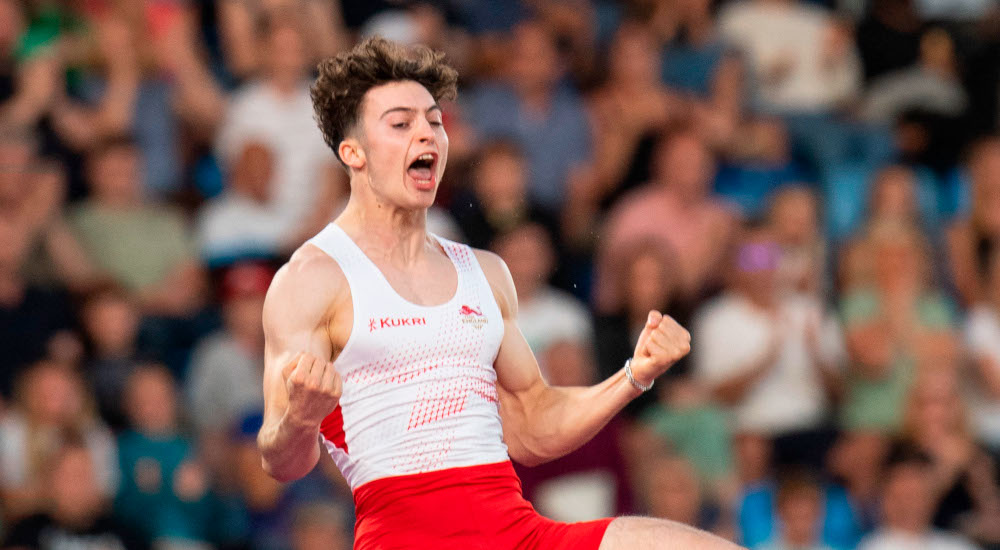 The third Englishman in the field, Owen Heard (Kate Rooney, Harrow) was unlucky in that he survived a third time clearance at 5.25 before he slipped as he attempted 5.35 and had to leave with his arm wrapped in a sling.

It was all about who could soak up the endless string of Kenyan surges in the men’s 5000m. Following an unremarkable opening 3000m (8:01), plenty were still in contention including the English pair of Marc Scott (Jerry Schumacher, Richmond and Zetland) and Patrick Dever (Alistair Cragg, Preston).

But that quickly changed after an unrelenting series of surges whittled the pack down to three: two Kenyans and one Ugandan, in the form of the 10,000m champion Jacob Kiplimo. And it was Kiplimo who found that extra stride to win in 13:08.08, while behind him Scott ran a great last lap to finish fourth. Dever crossed the line in seventh, both men recording good times for what was a very difficult race to judge given the continual change in pace; 13:19.64 and 13:20.12.

In the women’s hammer, Games record holder Camryn Rogers from Canada needed to make a mark in the third round after two fouls, but she proved she’s not the world No.2 for nothing as she calmly threw 74.08 to take the lead and the gold medal. England’s Anna Purchase (Mohamad Saatara, Nottingham AC) produced three long throws that ensured she made the final cut, highlighted by her 64.73 second round effort but after three fouls with her final three throws she had to be content with seventh.

In the women’s 400m hurdles, England’s Jessie Knight (Marina Armstrong, Windsor Slough Eton and Hounslow) ran a strong race to come home fifth. The gold medal went to an untroubled Janieve Russell from Jamaica who clocked 54.14 while Knight finished in 55.11.