Katarina Johnson-Thompson leads the heptathlon after two events as Team England’s athletes enjoyed a 100% qualification success rate in the first session of track and field at the Commonwealth Games.

While the heptathlon was the only finals action on Tuesday morning, members of the home team such as Keely Hodgkinson and Sophie Hahn were among those to confirm their medal-winning credentials in the Alexander Stadium in Birmingham.

Johnson-Thompson (coach: Aston Moore, club: Liverpool Harriers) amassed 2032 points in the 100m hurdles and high jump in her quest to defend her title. After opening up with 13.83 in the hurdles, she registered a season’s best of 1.84m in the high jump to hold a 17-point lead over Australia’s Tanielle Crase.

Jade O’Dowda (John Lane, Newham and Essex Beagles) enjoyed a similarly solid 13.60 hurdles before clearing an outdoor PB of 1.75m to rest in fifth on 1952.

Olympic and world silver medallist Keely Hodgkinson (Trevor Painter, Leigh) confirmed her status as one of England’s best bets for gold in Birmingham with a supremely capable qualification in the 800m.

Hodgkinson safely came home with a win in the final heat with a time of 2:00.18 as she progressed to Saturday’s final. Kenya’s world bronze medallist Mary Moraa, who won heat one, will be amongst her biggest rivals. 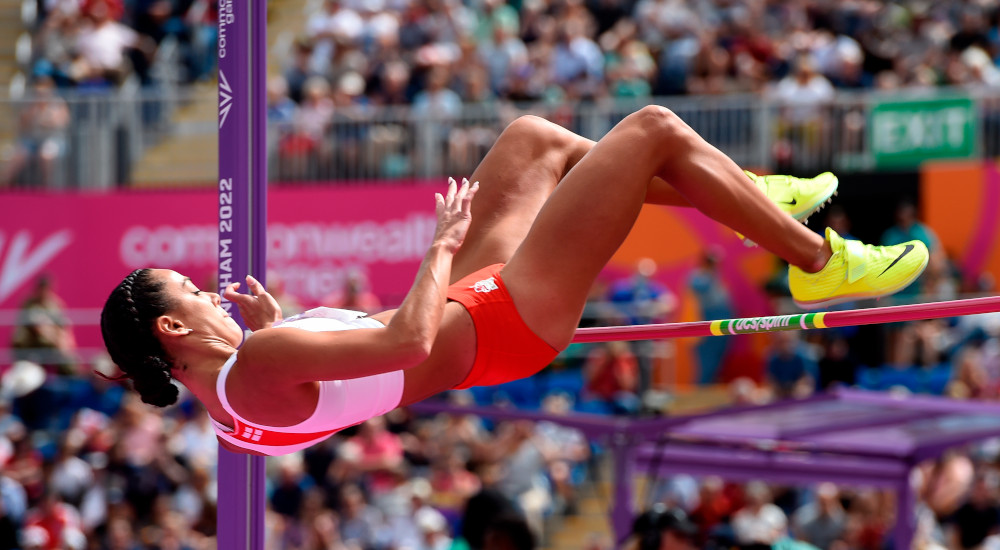 Alexandra Bell (Andrew Henderson, Pudsey and Bramley) will join them after she qualified as first non-automatic qualifier. She clocked a season’s best 1:59.76 in a very quick heat behind Jamaica’s Natoya Goule and Scotland’s Laura Muir.

In the T37/38 100m, Hahn (Leon Baptiste, Charnwood) began the defence of her title by leading the qualifiers for tonight’s final.

The Paralympic champion won the second heat in a season’s best of 12.80.

England will have three athletes in the final as Ali Smith (Benke Blomqvist, Guildford & Godalming) and Hetty Bartlett (Denis Costello, City of Norwich) went through as automatic qualifiers.

Smith was second in the first heat with 13.14 — just three hundredths outside her PB. Bartlett was third behind Hahn as she took 0.13 off her PB with 13.51.

Despite not being pushed in her 100m heat, Daryll Neita (Marco Airale, Cambridge Harriers) scorched to 11.02 into a 0.2m/sec headwind. That time, which was within a tenth of her PB, was enough to put her through fourth quickest.

Neita, who narrowly missed out on reaching the final at the World Championships last month, said afterwards: “It was nice to come out after what’s been a long week of travel and readjusting to the UK. It’s nice to win the heat and get ready for [the final] tomorrow.”

On her hopes there, she added:

“Always aiming for gold. Any time I step on the track I want gold. I’m going to get as close as I can.”

Imani-Lara Lansiquot (Stuart McMillan, Sutton & District) was seventh quickest overall to go through to the semi-finals with her season’s best of 11.15 for second in her heat.

Asha Phillip (Amy Deem, Newham and Essex Beagles) was also an automatic qualifier as 10th fastest in the rounds, her 11.27 representing her best of 2022.

Fastest were Nigeria’s Nzubechi Nwokocha and Olympic champion Elaine Thompson-Herah of Jamaica, who were first and second respectively in the opening heat with 10.99.

Staying with the 100m, the home-nation’s male sprinters were also on form.

Nethaneel Mitchell-Blake (Ryan Freckleton, Newham and Essex Beagles) and Ojie Edoburun (Stuart McMillan, Shaftesbury Barnet) were both comfortably through to the semi-finals.

Mitchell-Blake, who reached the semi-finals of the 200m recently at the World Athletics Championships, was the second of two automatic qualifiers with 10.14 behind Nigeria’s Favour Ashe in the opening heat.

Edoburun joined him with victory in heat three in 10.27 despite having what he described as a sub-par start. He said: “The race wasn’t great, I was a bit sluggish. My mum will probably message me and say, ‘Why the hell did you start like that?’ But I’ll fix it. Most importantly, I’m through to the next round.”

“I’ve got so much more to come, and I’d love to make history at home. There has been great history before, and I feel like I can be one of the guys to do it.”

The quickest overall was Sri Lanka’s Yupun Abeykoon with 10.06.

England’s shot putters had a relatively easy route to their final as only one athlete was required to be eliminated via qualification. Amelia Strickler (Zane Duquemin, Thames Valley Harriers) was fifth best qualifier with 17.10m.

Divine Oladipo (Ashley Kovacs, Blackheath and Bromley) improved with every round to end up with 17.09m. Meanwhile, Sophie McKinna (Paul Wilson, Great Yarmouth) rested up after just one throw which went out 16.70m. She said: “I took one throw, it was a really easy throw and then I passed on the next two. I want to conserve as much energy to go for it tomorrow in the final.”

2012 Olympic finalist Lawrence Okoye (John Hillier, Croydon) was third best in the discus qualification with 63.79m, his third best of the year. Jamaica’s Traves Smikle, with 64.90m, was nearest to the automatic qualifying of 65m.