On the final day of the Müller British Championships in Manchester, 15 English athletes gained themselves guaranteed selection for the Tokyo Olympics, with the two 800m finals in particular providing a great spectacle. As in all events, the two-lap runners were chasing one of the first two positions, which would secure their selection for the Games if they had set the Olympic standard during the qualifying window.

On the women’s side, European indoor 800m champion Keely Hodgkinson (Leigh; Trevor Painter) enjoyed a stunning win over an illustrious field. With five runners in the line-up having the qualifier, the pace over the first lap was a tactically slow 61.8 seconds. She along with Scotland’s Laura Muir and Jemma Reekie then moved away from the rest to set up an enthralling battle on the final lap. Going wide at the last bend, Hodgkinson, a former European youth champion, had the convincingly superior finish compared to either of her world-class rivals and came home more than a half a second clear. Her time of 1:59.61 was not far off her UK junior record set last month, but she seems capable of quicker yet given her last lap today was around 57.5 seconds. Reekie was second with 2:00.12, two hundredths ahead of Muir.

“Today was literally who brought it on the day,” said Hodgkinson. “It was going to be stacked. I stayed calm and executed my race.”

On the incredible state of British middle-distance running this year, she said:

“Middle-distance, something crazy in the water is happening at the moment. I don’t know what’s going on. It’s good to be a part of, as well as awful. But I’m really happy with today’s race.”

The men’s two-lap event, up shortly afterwards, was no less dramatic. Elliot Giles (Birchfield; Jon Bigg), one of five athletes in the field with the standard, hung on by just one hundredth of a second in 1:45.11 from Oliver Dustin (Border; Graeme Mason), who made up a lot of ground in the home straight and also gained an automatic Tokyo slot. Daniel Rowden (Woodford Green with Essex Ladies) was also involved in the desperate lunge for the line, clocking 1:45.14 for third.

With three athletes in the long jump field with the Tokyo standard, it was Jazmin Sawyers (City of Stoke; Lance Brauman) and Abigail Irozuru (Sale; Aston Moore) who booked their places on the team. Sawyers had a slow start but took the lead in round five with 6.73m and then added two more centimetres with her final leap. Irozuru had a best of 6.69m for second. Lorraine Ugen took third with 6.60m.

Morgan Lake (Windsor Slough Eton & Hounslow; Fuzz Cann) took her sixth British high jump title at 1.90m before going even higher with a first-time clearance of 1.93m. Having already chalked up the Tokyo mark, that was enough to see her on to the team for her second Olympics.

The only pole vaulter with the standard for the Olympics, Harry Coppell (Wigan & District; Scott Simpson), duly took a convincing victory. His third-attempt 5.70m was his third best-ever outdoors. In fact, both his better jumps were in these championships. Likewise, Ben Williams (City of Stoke; Aston Moore) was the only qualifier in the triple jump and he delivered victory with 16.37m. Nathan Douglas (Oxford City; Aston Moore) took his 14th medal in these championships, jumping 16.20m. 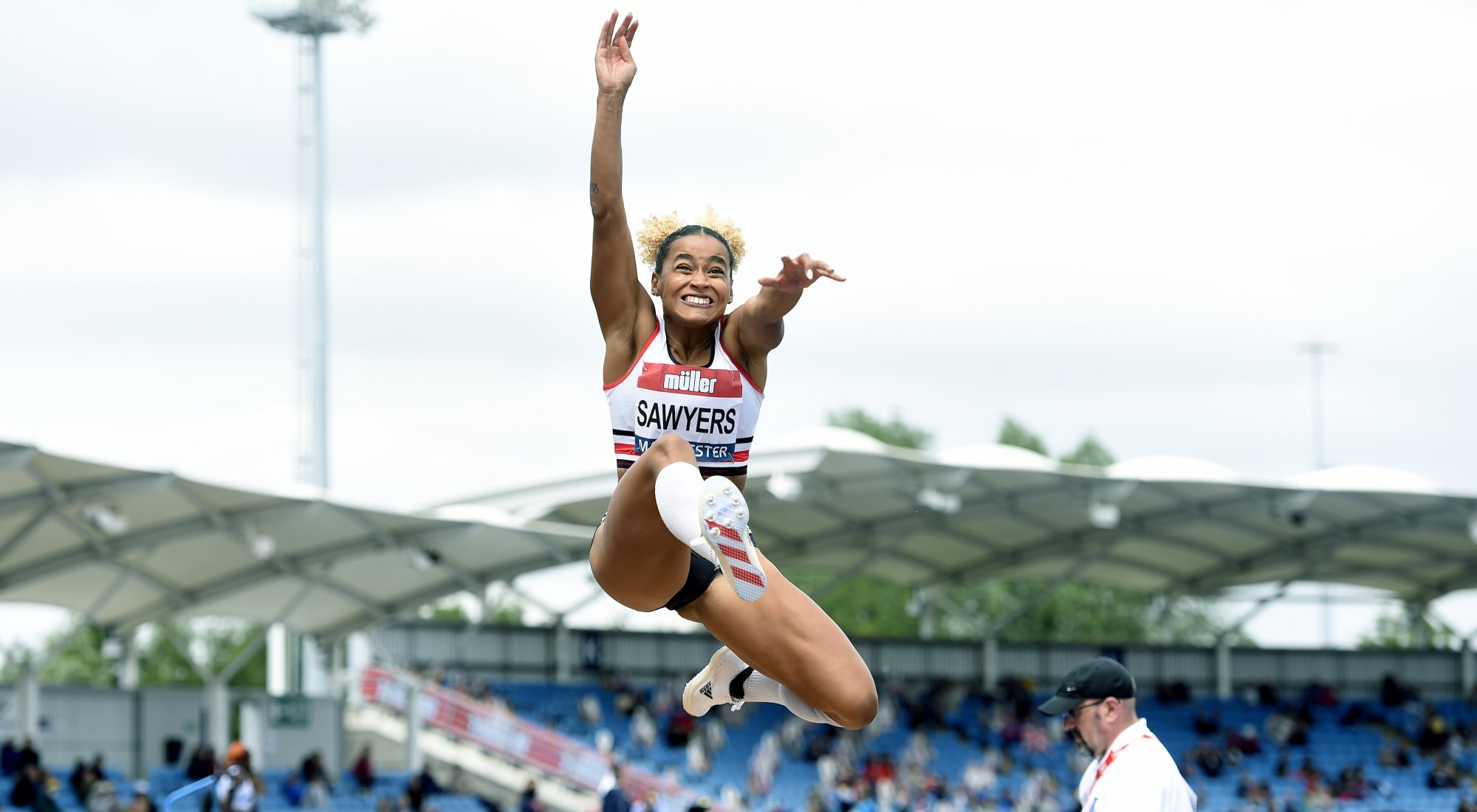 Jodie Williams (Herts Phoenix; Ryan Freckleton) completed a double not achieved in these championships since 2005 when she added the 200m to the 400m she won yesterday. With the Tokyo time under her belt in this one too, she will have a choice of events in Japan. Here, her 23.02 into a 2.9m/sec wind was enough to edge her in front of Scotland’s Beth Dobbin, another automatic qualifier, who ran 23.07.

Adam Gemili (Blackheath & Bromley; Rana Reider), who was fourth in the 2016 Olympics, is on his way to another Games after winning the 200m 20.63, battling a strong headwind of 1.7m/sec.

In the 400m hurdles, Alastair Chalmers (Guernsey; Matt Elias) moved away after the final barrier to clock 49.98 with Alex Knibbs (Amber Valley; Nick Dakin) second on 50.33.

Jessica Judd (Blackburn; Mick Judd), who has already gained automatic selection in the 10,000m, did likewise in the 5000m with a win over twelve and a half laps in 15:10.02, courtesy of a 61.7-second last 400m. She was followed home by the fast-finishing Amy Eloise-Markovc (Wakefield), who was agonisingly 0.54 seconds outside the Tokyo qualifying with 15:10.54. Verity Ockenden (Swansea; Tony Houchin), who had already been below the mark, was third with 15:12.24.

In a topsy-turvy 3000m steeplechase, Mark Pearce (Shaftesbury Barnet; Luke Gunn) won with a fast finish in 8:24.83, although he was just outside the time required for Tokyo. Zak Seddon (Bracknell), who appeared to have made the decisive move in coming past on the back straight on the last lap, was second with 8:25.08 and, as he already has the standard, will be heading in Japan. Phil Norman (Woodford Green with Essex Ladies; Tomaz Plibersek), who likewise has been under the time needed, was third with 8:31.87.

Taylor Campbell (WSEH; John Pearson), who set a British record of 78.23m earlier this month to gain the Olympic qualifying, cemented his place on the team with a win in the hammer. He registered a best of 75.10m in the last round and placed ahead of runner-up from Scotland Chris Bennett (73.53m).

Sophie McKinna (Great Yarmouth; Mike Winch) clinched selection for Tokyo with a shot put win. She had a best throw of 18.28m and all four of her other legal marks were better than the 17.16m of Amelia Strickler (Thames Valley; Zane Duquemin).

In the javelin, Bekah Walton (Blackheath & Bromley; David Turner) finished with a flurry, taking the lead in the fifth round with 50.50m and then going to a PB of 54.03m in the last round. Defending champion Freya Jones (Newham & Essex Beagles; David Callaway was second with 49.42m.

Five-time Paralympic champion Hannah Cockroft (Halifax; Jennifer Banks) won the 400m wheelchair race by just 0.17 from Sammi Kinghorn (Red Star; Ian Mirfin). Paralympic T38 champion Sophie Hahn (Charnwood; Leon Baptiste) won the mixed-class 100m with 12.77, a useful time considering she was running into a 2.1m/sec wind. Tom Bosworth (Tonbridge; Andi Drake), who has already secured his place on the team for Tokyo over 20km, completed victory in the 5000m race walk, which was not a trial event, with 19:25.62.

Overnight heptathlon leader Katie Stainton (Birchfield; David Feeney) stayed on top on her way to 5864, which was a qualifying mark for next year’s Commonwealth Games.