National records and UK-leading performances were the name of the game on an action-packed Saturday at the National Age Group Championships. 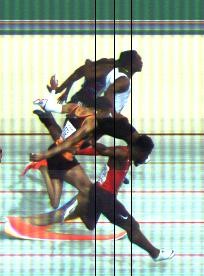 As is traditional for the opening day, much of the excitement centred around the 60m, the large crowd’s appetite whetted by some exceptional heats and semis, which set up what proved to be some pretty sensational finals. The U20 men’s race more than lived up to its star-studded billing and needed a – very – close and long look at the photo finish. After a tense few minutes the results were in; a dead-heat, something that had the experts rushing for their stats books. For the first time possibly since the 1982 senior men’s 200m at the Commonwealth Games, (yes, it’s that rare), two men had to share the title, as Henry Nwoke (Liverpool H, Mike Sweeney) and defending champion, Jeremiah Azu (Cardiff, Helen James) both crossed the line in 6.77. For Henry, it was a case of blasting out and trying to hang on, while for Jeremiah it was all about overcoming a sluggish first three strides and dipping hard. “It’s pretty unusual,” said Jeremiah. “I’ve never had that before, he laughed. “But it keeps me on my toes racing the younger guys. I’m pleased enough as that was my best time of the season. And I set a goal to be first, added Henry, more than satisfied with his day’s work. “So, I’m really happy especially as it was my best time.”

It was a pulsating climax to a string of fabulous short sprints, where running lifetime bests were order of the day. Amanda Obijiaku (South London, Shani Palmer) flew to just that in the U20 women’s final with 7.48. “I’m absolutely ecstatic; I didn’t think it was possible to win,” she said, adding that the European U18s is now very much on the radar. In the U15 girls’ race Niah Akintokun (Shaftesbury Barnet, Ty Holden) turned nine wins in a row into 10 with a 7.62 victory; solid indeed. Earlier in the day, Nell Desir (Cardiff Archers, Lisa Waddon) who is actually an U13 ran 7.83 in the semis, not only a Welsh record, but superior, it could be argued, to the UK hand-timed best of 7.8 run by Debbie Bunn way back in 1975. Whatever, it was mighty quick! Dante Legister (Cambridge H, Mick Bond) was also as impressive, winning his U15 boys’ final in 7.15. In the U17 women’s final Joy Eze (Gateshead, Mike Donnelly) found her best form at the right moment to win in 7.51, as did Michael Onilogbo (Basildon, Carl Graham) whose 6.87 victory in the U17 boys’ race was a PB.

In the field, the pole vault has been making a name for itself thanks to a certain Swede and his world record in Glasgow last week. So, it was hugely appropriate that Nyree Perry (North Somerset, Edward Thompson) produced a National Record (Welsh in this instance) of 3.30 in the U15 girls’ event to win the title. Then, safe in the knowledge she had that gold in the bag, she had the bar moved to 3.50m, for what would have been an outright PB. On this occasion she came up shy, although her form suggests there is much more to come. “I have cleared it in training so I’m a bit disappointed, but now I’m looking forward to the English Schools in the summer,” she said.

While all this was unfolding, in the men’s U17 triple jump, Aaron Ashmead-Shoye (Newham and Essex Beagles, John Herbert) started the competition as firm favourite thanks to his 14.53 at the Southern Champs earlier this month. That pre-competition favourite’s tag didn’t appear to bother him too much as in the first round, one riddled with stuttering efforts and no-jumps from his competitors even his opening range-finding leap of 14.28 proved good enough to secure him the title. From there, it was a case of finding a rhythm which he did in round 3 with a whopping 14.59m for 12th on the all-time list indoors, taking home the first gold of the weekend.

Daniel Falode (Cambridge H, Guy Spencer), No1 in the UK in 2020, proved equally dominant in the U20 men’s event with a 15.77m second round, while Gracie Wall (Bedford and County, Barry Johnson) also found herself with that favourite’s target on her back in the U15 Girls’ high jump thanks to her English Schools title won last year. Three found themselves battling it out at 1.59m, but she too rose to the occasion and popped over 1.62m for her gold medal.

Not quite as dramatic as the 60 metres dead-heat but nonetheless enthralling was the U20 women’s long jump which had to be decided by countback. As a result of her second-best effort of 6m Abigail Pawlett (Stockport, Joe Frost) took home the gold with 6.04m thanks to her third-round leap, exactly the same as Jodie Smith’s (Windsor Slough Eton & Hounslow, Laura Turner-Alleyne) opening effort.

That perfectly summed up a thrilling Saturday as the day’s action flowed thick and fast, and at times it was difficult to catch your breath such was the intensity of the occasion. But it was the U17 women’s 300m that really caught the eye. After being disqualified from the first heat, Emilia Rock (Vale of Aylesbury, Nick Taylor) successfully protested that she had been distracted by a noise in the crowd, so she was granted a chance to qualify by running against the clock in a solo time trial. If she ran quicker than the 6th fastest time of 41.87 she would advance. The UK U15 age best record holder (39.74) duly obliged and ran the swiftest time of all, stopping the clock at 40.70. As for the final, it was all about Ashley Nemits (Warrington, Trevor Painter) who led from the gun and held off a late surge from Emilia to win in 39.60.

And finally, if you’re looking for something a little unusual, perhaps the U20 women’s pole vault fits the bill. Sale athletes took first, second and third in what has to be the ultimate club champs. Hats off to Sophie Ashurst (Sale, Andy Ashurst) for her 3.70m victory, but definitely well done to Sale for not only providing three medallists, but three different coaches as well. Lazarus Benjamin (Sale, Matt Cullen) then added the men’s U17 gold with a 4.60m clearance to the medal haul, a nice improvement on his pre-Sheffield best of 4.41m. The phrase ‘strength in depth’ doesn’t do them justice – this really is a Northern powerhouse!

If you aren’t there to catch the action in person, be sure to follow online. All the links you need below: