Another four superb championship record performances were produced as the country’s best youth athletes gathered in Bedford for the second day of the England Athletics Under-17 and Under-15 Championships.

Breaking the 30-year-old championship record held by Olympic medallist Katharine Merry, the appropriately named Success Eduan (Sale Harriers Manchester, Anita Richardson) clocked an amazing 23.71 with the wind just over the legal limit. Meanwhile, U17 200m winner Joel Pascall-Menzies set his second championship mark of the weekend and Nandy Kihuyu also set new figures in the U15 300m. Then in the last final of the day, Joseph Harding (Basildon AC, Tony Jarrett) smashed a 20-year championship best in the U17 100m hurdles. As well as beating Merry’s meeting best time of 23.74, Eduan’s clocking in the 200m was also one hundredth faster than the Birchfield Harriers legend’s UK U17 best. However, with the wind gauge showing +2.3m/sec, that mark will remain on the books a little longer at least. Nevertheless, it was a great performance by Eduan – who ran a PB of 24.31 in the semi-final to climb into the UK all-time top 10 for the age group, collecting more silverware after her English Schools’ title in July. 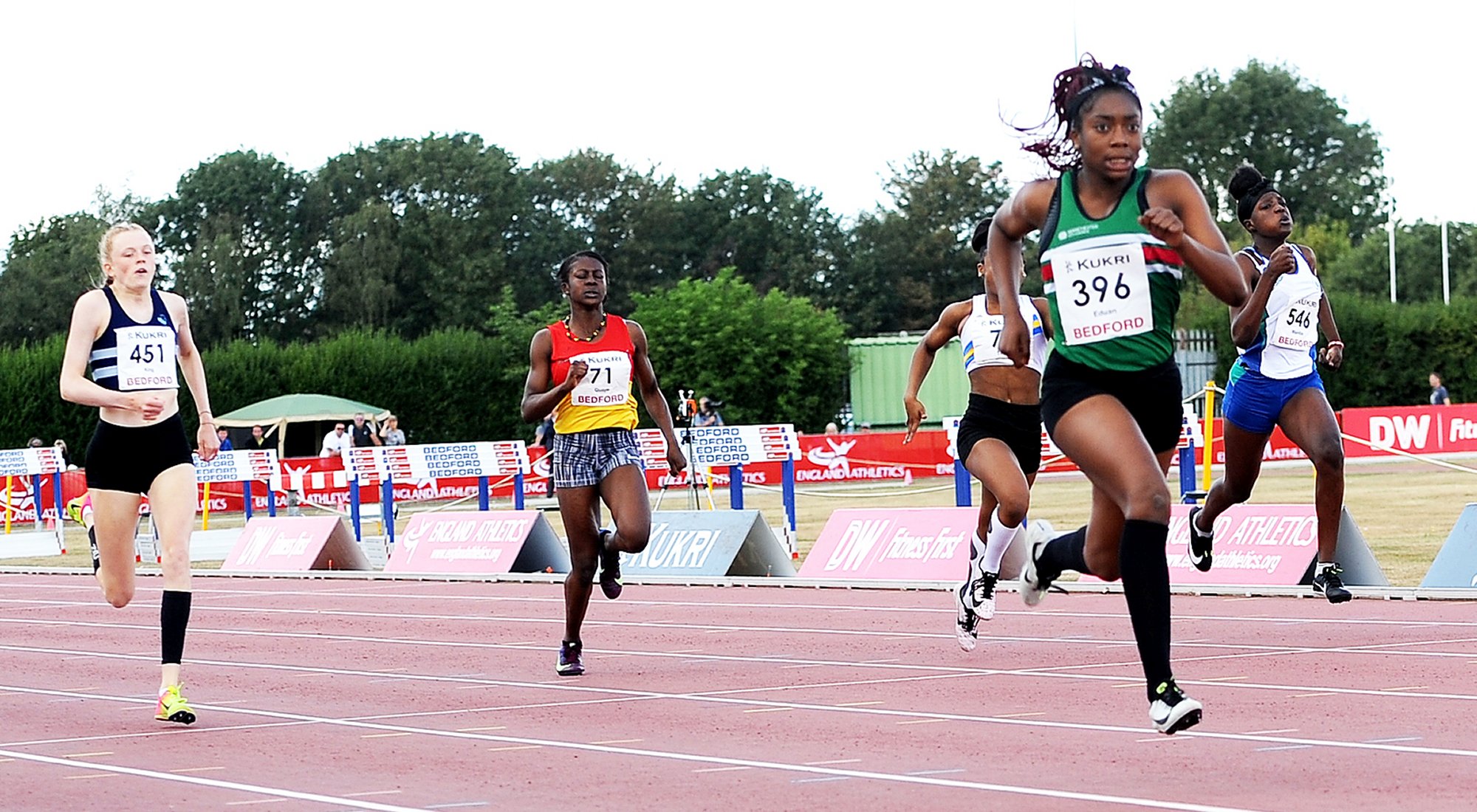 Silver medallist Nia Wedderburn-Goodison (Harrow AC, Andre Williams), who set a championships best yesterday on her way to winning the 100m, was also well under her PB with a quality time of 24.00. Kihuyu (Hallamshire Harriers Sheffield, Veronica Boden) was only third quickest of the athletes lining up in the final. Emilia Rock (Vale of Aylesbury, Nick Taylor), the English Schools’ champion, and Rebecca Grieve (Pitreavie AAC, Francis Smith), Scotland’s  number 1, had both gone quicker. However, taking more than a second from her PB, she clocked 39.38 to go to fourth on the UK list for the age category. Grieve, with 39.85, climbed to 10th on those rankings, while Rock’s 40.14 for bronze added to the great standard. The winner said afterwards: “I didn’t really expect to win that because the girls are both really good and they’ve always been quicker than me indoors, so I’m really to have gone out and won that. I’m shocked with the time. I didn’t expect to break 40 today, so I’m really happy that I managed to go and do that.”

Pascall-Menzies’ half-lap win completed a sensation sprint double after his 10.46 in the 100m yesterday. The Newham & Essex Beagle, whose meeting record had come in the 100m semi with a windy 10.39, was just as impressive as he ran 21.05 to finish nearly half a second clear of the field. Only four British U17s have ever run quicker than the Nat Senior-coached athlete, who went seven hundredths under the CBP set by Jono Efoloko four years ago. Henry Nwoke (Liverpool Harriers, Mike Sweeney) added another silver to the one he collected behind Pascall-Menzies yesterday, setting another PB – 21.55.

Harding’s 12.48 clocking to win the 100m hurdles was also the quickest ever by a Brit in the age-group. Unfortunately for him, the wind was again over the legal limit for rankings purposes at 3.1m/sec, but it does count as a meeting record. Down an age group, Freddie Clemons (Stratford Upon Avon, Paul Bearman) took 80m hurdles gold with 10.92. In the U17 women’s 80m hurdles, heptathlete Abigail Pawlett (Stockport Track and Field, Joe Frost) claimed her second gold of the weekend. The winner of yesterday’s long jump registered 11.08 with a 2.2m/sec following wind. Ella Scott (Leevale, John Naughton) was just eight hundredths outside the CBP with her 10.99 in taking the under-15 75m hurdles title.

Archie Yeo (Scunthorpe & District, Martin Bishell) was an agonising one centimetre short of the long jump championship best as he recorded a wind-assisted 7.49m (+3.8m/sec) in the final round to step up from silver last year. Yeo, who is seventh on the UK U17 all-time list with 7.45m, had a best legal jump of 7.09m.

In the U17 men’s pole vault, Reuben Nairne (Giffnock North AC, Brian Donaldson) added two centimetres to his Scottish age-group best, his 4.72m also being the best in the UK in the category this year.

Kirsty Costello (Kilbarchan AAC, Chris Bennett & Karen Costello) is a big leader on the U17 hammer rankings for this year, so it was no surprise to see her take gold. Stepping up from fifth last year, the 2017 national U15 champion found 61.42m enough to take gold. Cleo Agyepong (Cambridge Harriers, Peter Wishart & John Hillier) took the U15 shot put gold, her 13.59m being a PB and a distance only bettered in her age group this year by the runner-up, Lily Carlaw. The Northampton AC athlete, coached by Stuart Carlaw, had a best of 13.33m, and she was also a clear winner of the U15 girls’ discus with 39.06m.

James Rollo (Inverness Harriers, Duncan Flockhart), who was already the UK No.1 in the U15 discus this year, added more than two metres to his best with 47.35m to take gold. Sticking with the throws, Harriette Mortlock (Basildon, Micha Dornan) won the U17 javelin with 46.11m. Sophie Ashurst (Sale Harriers, Andy Ashurst) was another field-eventer in form, clearing 3.71m to win the U17 pole vault. Her clubmate Melissa Booth, coached by Keith Hunter, set a PB as she won the U17 triple jump with 12.39m. Thomas Holmes (Marlborough & District Junior AC, Mark Bradford) added more than six metres to his best as he won the U17 men’s javelin with 66.69m. Donovan Capes (Nene Valley Harriers, Lewis Capes), grandson of former Commonwealth champion Geoff Capes, won the U15 shot with 15.46m as all three medallists set PBs.

On a weekend of great sprinting, Freddie Arkell (Hercules Wimbledon, Juan Hernandez) was another to impress. The U15 boys’ winner clocked a windy 22.36. Sophie Walton (Horwich RMI, Trevor Williams) was also boosted by a gust that was over the allowable limit as she won the U17 half-lap in 24.30.

Heptathlete Emily Misantoni (Stockport Track & Field, Joe Frost) took more than half a second from her PB with 42.68 to win the U17 300m hurdles. In the U17 men’s 400m hurdles, UK No.1 Pyers Lockwood (Eastbourne Rovers AC, Trevor Simcox) won as expected, clocking 55.81. However, he was neck and neck with Ethan Flaherty (Liverpool Harriers & AC, Stephen Carroll) until the latter clattered the final hurdle and was thrown off his rhythm. Under the circumstances, the silver medallist’s time of 56.16 shows his PB is due for revision.

It was much more clear-cut over the flat 400m as Mario Dobrescu (Ilford, Nat Senior) clocked a PB of 48.71 to add to his indoor title from last winter with more than half a second to spare. The two-lap finals at the end of the morning produced a number of exciting races. U15 Ella Greenway (Cleethorpes AC, Joanna Evans) added the England title to the English Schools equivalent from earlier in the summer. Her time of 2:09.26 is one only she has beaten in her age group in the UK this year. She also pulled runner-up Katie Johnson (Edinburgh Athletic Club) to a PB of 2:09.63. In the boys’ event, Jake Minshull (Coventry Godiva Harriers, Eamonn Kelly) and Oscar Logan (Law & District, Patrick Kelly) were out on their own at 600m and, after a close contest all the way, it was UK rankings leader Minshull who stopped the clock on 1:58.87. The owner of the championship best in that age group, Dan Joyce, won the next race on the programme. The Tynedale Harrier, coached by Peter Venus, clocked 1:56.83 as he added the under-17 title to his gold from two years ago. Isla Calvert (Livingston, Sandra Hardacre) was a class apart in the U17 race, clocking 2:07.06 to come home more than four seconds clear.

Before Kihuyu’s exploits in the U15 race, two other 300m were closely fought affairs. Particularly was this the case in the U15 boys’ race, which any of three athletes could have snatched with 50m to go. In the end it was Bayleigh Lawton (Spenborough & District, Stuart Hall) who took it in 36.13, slicing more than a second off his best. The only runner in the age group to run quicker this year is runner-up Joe Wheeler (Tavistock, Tammie Ryder), who clocked 36.28. As just 0.26 seconds separated the three medallists in the U17 race, Neave McGhee (Liverpool Harriers, Steve Carrol) took gold with 39.84.

In the U17 women’s 1500m steeplechase, Georgia Ledingham (Corstorphine, David Arnott) clocked 5:02.29 to easily take gold. The athlete who is fifth on the UK all-time list for her age group was within three seconds of the championship best. Lewis Sullivan (St Edmund Pacers, Martyn Brophy) powered to the front with around 250m to go in the U15 boys’ 1500m, stopping the clock at 4:18.44. Benjamin Reynolds (Cardiff Athletics, Arwyn Davies) won a hard-fought U17 men’s 1500m, clocking 3:56.37. He was closely tracked by Aaron Samuel (Ilford AC, Wayne Hick), who was eventually passed by the fast-finishing Daniel Payne (Middlesbrough Mandale, Martin Peevor), who ran 3:57.10. In the U17 3000m, a devastating kick in the last 100m brought Osian Perrin (Menai Track and Field, Andy Walling) home to gold in 8:34.57.

English Schools’ and England indoor champion Luke Ball (Yate & District, Jeremy Dale) collected yet another title in the U15 high jump, registering a jump of 1.80m. After winning the triple jump title yesterday, Halle Ferguson (Trafford, Andrew Wood) completed a double by topping the high jump field with 1.69m. Meanwhile, coming back to the infield after taking silver and bronze respectively in the U15 high jump were Kreston Calvert of Wirral AC and Sammy Ball (Reading AC, Mike Dyer). Calvert was not far off his best in taking triple jump gold with 12.76m as Ball was second with a wind-assisted 12.69m. Katy Beadle (Windsor Slough Eton & Hounslow, Keith Fleming) was just two centimetres short of her best, set when winning the England indoor title this year, as she took gold in the U15 long jump with 5.57m.

Similarly dominant is hammer thrower Alex Bernstein (Preston Harriers, Bob Welfare), who in the U17 event took his 14th victory out of 14 competitions in 2019. His best of 66.01m was more than three metres better than the rest of the field.

Today’s exceptional performances were made even more special with the first of our Regional Volunteer Awards forming part of the proceedings. Click here to read all about our awards and the inspirational volunteers who received awards today.