Qualifying standards for the European Indoor Championships by three athletes, including a European lead time and a number of personal bests were the highlights of a successful England Athletics team trip to Vienna. The team was a mix of experienced and developing young athletes selected from trial races and rankings.

4 highlights of the day:

First on the track was the women’s 60m hurdles. Gabriella Ade-Onojobe (Coach: Lloyd Cowan/ Clarence Callender, Club: Woodford Green Essex Ladies) finished with a Personal Best of  8.41, and Anastasia Davies (Coach: John Blackie, Club: Blackheath & Bromley) with a Season’s Best of 8.44. They finished second and third in their respective heats. Repeating the feat in the final Gabriella finished third with a time of 8.41. Next on the track were the 60m races for men. Harry Aikines-Aryeetey (Coach: Benke Blomquist, Club: Sutton & District) and Jack Lawrence (Coach: Andy Paul, Club: Birchfield Harriers) were in the first heat and finished first and second, clocking 6.78 and 6.86 respectively. Later in the day Harry went on to improve his time to 6.71 in the final. Arguably the performances of the day go to the 60m women however; Rachel Miller (Coach: Linford Christie, Club: Thames Valley) winning heat one in a European Lead time of 7.20, and Amy Hunt (Coach: Joe McDonnell, Club: Charnwood) setting a PB of 7.40 in the following heat. Rachel went on to win the final and Amy finished third, lowering her PB again – this time to 7.39 on her senior debut.

The men’s long jump saw Reynold Banigo(Coach: Lukasz Zawila, Club: Sale Harriers Manchester/ Loughborough Students) jump a SB of 7.61m twice to win the competition, Feron Sayers (Coach: Aston Moore, Club: Birchfield Harriers) struggled somewhat with the run up but managed to finish in third place. Feron said “I’ve definitely been made aware where my ability is at and it has given me confidence to know what I can jump indoors and it makes me feel good for my next comp, – hopefully the British Champs and European Champs”. The women’s long jump saw Abigail Irozuru (Coach: Tom Cullen, Club: Sale Harriers Manchester) having a consistent series of jumps, and winning the competition with a jump of 6.55m. Team mate Jahesha Thomas (Coach: John Shepherd, Club: Blackheath & Bromley) also produced in the last round, to finish second, a jump of 6.27m.

Next on the track was the men’s 400m. Ben Clarridge (Coach: James Hillier, Club: Abingdon/ Bath Uni) won his heat in 47.93 and in arguably the strongest field of the day his time put him eleventh overall. Elliott Powell (Coach: James Hillier, Club: Leicester/ Loughborough Students) came second in his heat with a time of 48.00 placing him thirteenth overall. Another debutante Krishawn Aiken (Coach: Chris Baillie, Club: Shaftesbury Barnet/ Glasgow Uni/ Kilbarchan) finished his heat strongly in a time of 48.88. Meanwhile there was fantastic news in the women’s 400m – Amber Anning (Coach: Lloyd Cowan, Club: Brighton & Hove/ Blackheath & Bromley) ran 53.35 which is the fastest time by an under 20 in 49 years! Also winning her heat was Lina Neilson (Coach: Ryan Freckleton, Club: Enfield & Haringey/ Queen Mary & Westfield College) in 54.54. The team’s sprints coach Ryan Freckleton said, “This is my first time on the team and I can’t express how professional the athletes and team staff were, paving the way for future world performance and development.”

The middle distance races was one full of PBs for the England athletes: Jonny Hay (Coach: Craig Winrow, Club: Aldershot, Farnham & District) finished strongly to place fifth (3:45.93) in a competitive 1500m field. Kieran Reilly (Coach: Mark Hookway, Club: Tonbridge/ Loughborough Students) was within two-tenths of a PB with a time of 3:46.12. Keiran said he had enjoyed competing in his first International and learnt from the experience the opportunity had given him. Joe Reid (Coach: Matt Elias, Club: Cardiff/ Manx), a winner from Sheffield at the beginning of the month, won his 800m heat in 1:48,37 which bettered his outdoor PB. In the same heat, Alex Botterill (Coach: Andrew Henderson, Club: City of York) ran an indoor PB of 1:48.85 to make it a one / two for the England men. Aimee Pratt (Coach: Vicente Modahl, Club: Sale Harriers Manchester/ Manchester Uni) finished her 800m with an indoor PB of 2:06.93.

The shot put is the only indoor throw – the women’s event saw Sophie McKinna (Coach: Mike Winch, Club: Great Yarmouth) win the competition putting 17.37m; all six of Sophie’s puts were above the European qualification standard. Sophie said “Another European qualifying mark but not the best distance for me today.  I’m looking forward to the next few weeks.” Scott Lincoln (Coach: Paul Wilson, Club: City of York) achieved an indoor PB of 19.09m and finished second, and team mate Youcef Zatat (Coach: Scott Rider, Club: Woodford Green Essex Ladies/East London Uni) finished right behind with 17.88m. Scott said, “I was happy to build on my throws to beat my indoor best and I’m excited to see how the season unfolds.” Youcef added, “I’ve moved forward of late, so throws that were good for me last year aren’t so satisfying anymore. It’s early days and I want more but it will come.”

Also in the field at this competition was triple jump for the men. Nathan Douglas (Coach: Aston Moore, Club: Woodford Green Essex Ladies) started with an easy 15.84m and then had 3 no jumps, getting in a fifth round leap of 16.11m to finish second behind Philipp Kronsteiner who produced an Austrian National Record. Julian Reid (Coach: Aston Moore, Club: Sale Harriers Manchester) was struggling with some technical issues until pulling out a commendable 16.03m in the last round, and Seun Okome’s  (Coach: Keith Hunter, Club: Sale Harriers Manchester/ Liverpool John Moores) jump of 15.57m in the fourth round was his best of the day. Following the competition Nathan said, “The comp didn’t go to plan but it made me aware of what I need to work on. I felt good and I have gained confidence for my next competition.”

The track finished with the 200m sprints and – not to be outdone by the 60m athletes – an England athlete won in both the men’s and women’s races. Hayley Mills-Jones (Coach: Steve Mills, Club: Tamworth/ Nottingham Uni) further improved her UK lead in a time of 23.94 to win the competition convincingly. Lina Neilson (Coach: Ryan Freckleton, Club: Enfield & Haringey/ Queen Mary & Westfield College) reduced her 200m best time to 24.37 for a victory in her heat. Jordan Broome (Coach: Ronnie Williams, Club: University College Birmingham/ Sale Harriers Manchester) had a fantastic race seeing him take the UK lead in a time of 21.36. This was further echoed by England team mate Elliott Powell after his previous 400m, returning to the track to win his race with a time of 21.73.  Ben Claridge, also in his second run of the day, finished his heat in 21.82. 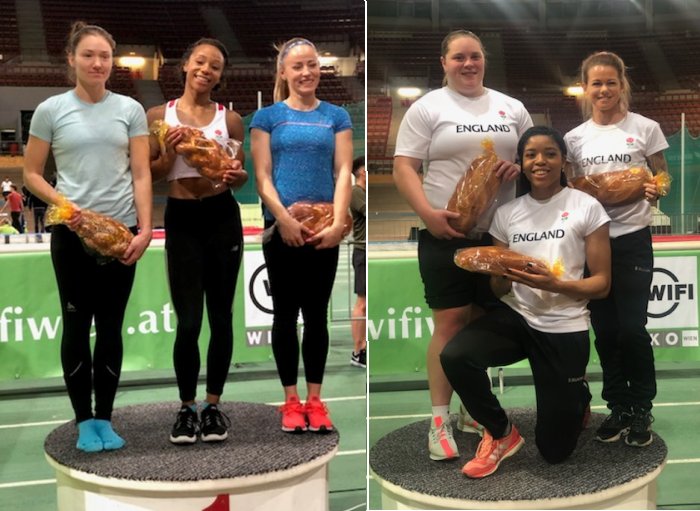 Team Leader Andy Day said, “It was really pleasing to witness a number of outstanding performances from so many athletes during a day of highly competitive athletics and even more encouraging to note the positives that all the athletes seemed to take from their performances.”

Alison Potts, Team Manager added, “I always love coming to Vienna for this competition as the organisers welcome us and the standard of organisation reflects the standard of the athletics. The team this year were a pleasure as always and this meet will remain one of my favourites.”

We have a website section containing a huge range of support, resources and advice for athletes during COVID lockdown.

Share your ideas on retaining and increasing Track and Field participation to help ensure young athletes of all abilities remain part of the athletics family.