A tribute to Gwyn Williams 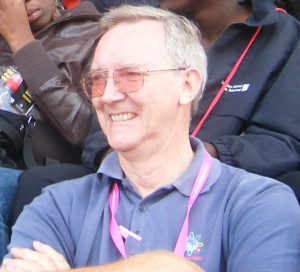 Gwyn was President of London Schools AA, London / South East England UK School Games Team Manager, and a dear friend to many people involved in athletics. He passed away on Tuesday 12 November 2019.

Gwyn had been ill for about a year, hence his absence at a number of meetings this year, including the English Schools Championships. The sad news was conveyed to the LSAA by his family. We in turn informed the English Schools AA, and an announcement was made at their recent AGM, where all delegates stood in silence to remember a great man and mark his passing.

At the moment I am not aware of the family’s plans for Gwyn’s funeral, but as soon as I know I will pass on the information. I imagine that those of you who knew Gwyn would want to pay your respects to such a special man, but if the family decide to have a close family  only funeral we would of course respect their decision.

Gwyn was involved with London Schools AA for more than 40 years, in many different roles. He was also involved with the UK School Games from its inception, and led the London / South East England team to many victories. In this time he managed several hundred athletes, in fact probably a lot closer to several thousand athletes, including many who went on to represent numerous different countries at every possible level, and in a variety of sports.

Over the years many athletes and their parents, have spoken very highly of Gwyn, and in his memory the LSAA will set up a special award.

Personally, whenever a new issue arose, and there were many over the years, both at the ESAAs and at the UKSGs, I knew I could turn to him for guidance. I will always be so grateful to Gwyn for his many gems of wisdom, his unique way of dealing with situations, his stories, and his sense of humour! I know many of you will feel the same.

His death leaves a huge hole in athletics, and our hearts.